skip to main | skip to sidebar

Things we are waiting to find out:

1) Will my husband be accepted to graduate school? The program he applied for is supposed to start at the beginning of the summer and it is already late April. We are waiting to find out about this because it will determine whether or not he is going to be a teacher or if he needs to begin pursuing another career path ASAP. The program pays a stipend, which will be enough to live on (combined with my part-time job). If he does not get into the program, we have no job or income lined up for him after the current school year is over, which is in about 5 or 6 weeks. Letters were supposed to be sent out at the first of April, but the program is funded by the federal government. They did not pass a budget until April 15th. Letters were supposed to go out right after that. Every day now I rush to the mailbox and every day since Monday have been disappointed.

2) Where will my daughter's school be located for next school year? They have narrowed down the possibilities to 2 locations, neither of which is convenient to our house. But they are in opposite directions, one in the East part of town, one in the West. The location of the school will be a big factor in deciding how to work our morning routine.

4) What will happen at my job? There is supposed to be a big announcement tomorrow. Although I know what the announcement is about, I don't yet know what the result/consequence will be for my department or for me personally. It could mean a huge change, or it could be status quo.

5) Should we sell or rent our house? This depends in large part on the answer to 1).

7) What will the results of my daughter's latest genetic tests be? We did the blood work a few weeks ago and now just waiting to hear. I am fairly certain they will both come back negative and we will still be waiting to find out...

8) What is causing my daughter's developmental problems? This is the question we have been trying to answer for 3 years now. The doctors find her quite mysterious. We have tested for everything that would possibly be recommended for her symptoms. Now we are going in every 6 months for the geneticist to check her progress and see if anything else is being manifested to give us more of a clue.

9) Will she ever learn to talk? I think this is a yes, but no one can be sure.

10) Will she grow up to be "normal"? Will she ever live independently? I guess no parent of a 3 1/2 year old knows the answer to this question, since none of us knows the future.
Posted by Amy at 7:40 PM 2 comments:

Tonight Miss Picky was willing to eat dinner by alternating bites of fish and Skinny Cow ice cream sandwich. I was thrilled by that...eating food by being bribed by eating more food! The only thing better would have been if the ice cream sandwich was not the low-fat kind.
Posted by Amy at 4:24 PM No comments:

Superbowl Snacks or Why We Love Avocados

I have had the idea to write this post since the Superbowl, but I have not written a single post since then. Some good news regarding Miss Picky (she said 2 words today!!! "Diaper" and "Birdie," I'm so proud) has inspired me to pick the posting back up.

I suspected that I would stop writing when things were discouraging, and unfortunately proved myself right. We went through a couple of bad eating weeks and I lost all interest in writing about it. I'm not really a writer anyways, I could never get past day 2 of keeping a journal and all of my school papers came back with comments such as "Please expand here..." "Tell me more about this.." etc.

That being said, I need to sing the virtues of the creamy, dreamy fruit that has basically kept Moriah alive this past year - the avocado. Moriah eats at least half of an avocado almost every day, scooped right out of the skin with a spoon. We've also been able to use avocados to introduce her to other foods as well. We've mixed it with various meats, hard boiled egg yolks, grains, and other veggies, spread it on crackers, and mashed it in yogurt.

On Superbowl Sunday I made a simple guacamole with some freshly squeezed lime juice, salt, and garlic powder to go with tortilla chips. I also sauteed a little ground beef with some salt and oregano to see if Miss P would eat it with the guacamole. YUM. Loaded onto chips, the guac + seasoned beef made the most delicious cheese-less nachos. I was not surprised that Miss P ate a very nice amount. A good meal like that, when eaten by Moriah, always makes my day. So I decided to do a little research on avocados to see exactly how nutritious they really are. I was so impressed with the humble-looking little fruit. The Potassium! The Vitamins! The Folate! The Monounsaturated Fat!!! No wonder Moriah has survived despite barely eating anything. Here are the nutrition facts, based on a serving size of 1/5th of a small avoacado. A much more in-depth analysis is on this website

They apparently have 20 times the average calories as compared to other fruits. I guess this means that they are the perfect food for Moriah and that I should enjoy 1 or 2 slices of her leftovers.
Posted by Amy at 4:44 PM 1 comment:

Meatloaf - It's What's for Dinner

Did you know there are almost as many recipes for meatloaf out there as there are people who have ever made meatloaf? I was so amused today searching for meatloaf recipes to make for dinner. I know not everyone is a fan of the humble American food staple of ground meat mixed with vegetables and/or carbohydrate, patted together and baked as a loaf, but I am personally a fan of a good meatloaf. I was firmly in the non-meatloaf eating camp (I can't tell you how many recipe reviews today I read that started with "I don't really like meatloaf but...") until my early 20s. My only experience up to that point was a peek at a fresh-from-the-oven loaf swimming in its own grease...YUCK. Then I had one that was made with very lean beef, chock full of chopped vegetables, and spiced up with a perfect blend of seasonings. Ever since then I've been searching for Our Family's Recipe for meatloaf. I've tried several: a Tex-Mex version made with salsa, a Cheeselover's version made with (obviously) plenty of cheese, a Barbecue-flavored meatloaf, but still haven't found one that I wanted to make more than twice. A couple of weeks ago I brought home a ready-made meal from Central Market that had a glazed meatloaf, macaroni and cheese, steamed broccoli, and fresh rolls. Would you believe Miss P readily ate a small amount of everything? I was happy all evening after she put down that meal. So today I decided to try to reproduce the experience. I went on the search for a glazed meatloaf and was promptly overwhelmed by all of the results. I went with the first one that didn't call for anything I didn't already have in the kitchen. It turned out really well and was delicious with a side of roasted cauliflower. Miss P ate about 5 bites and then decided she'd rather be entertained that eat. I have high hopes for trying again with leftovers!

I like meatloaf because:
I can use ground beef from my Father-in-law's ranch. It's very lean, from grass-fed cattle, no added hormones, etc.
It's easy
It's inexpensive
It's healthy (ok, not if you make the Cheeselover's version)
It tastes good
There is a good chance Miss Picky will eat it
There is a 100% chance Zeke and I will eat it
The leftovers taste great in a toasty sandwich or wrapped in a hot tortilla

Combine all the ingredients other than the glaze in a large mixing bowl. Form mixture into a loaf and pat into a 9x5 loaf pan. Bake at 350 degrees for 1 hour, making sure a meat thermometer reaches 160 degrees. Halfway through the baking time put the glaze on the meatloaf and return it to the oven. See if your picky eaters like it too!
Posted by Amy at 7:39 PM 2 comments:

Saturday mornings are the time for homemade pancakes at our house. I learned the basic recipe during a stopover in El Paso with a friend's family, en route to California. It is so easy to remember because it is all in ratios of 1. I never bother with store bought mixes anymore now that I know this super fast and easy recipe.

Some time ago, when I decided to see if Moriah would eat pancakes for breakfast, I started adding 1 smashed banana to the batter. This was a HUGE hit, it was one of the only instances I actually saw her pick up food from the tray and put it in her mouth (usually only old stale cheerios from the seat of the high chair or from off the floor were voluntarily picked up and eaten). Most of the time I add in some mini-chocolate chips for the grown-ups and we can't seem to get them into our mouths fast enough either. Since that time, pancake Saturday mornings have become a tradition at our house.

Last week I didn't have bananas but I did have a small 6 oz. can of crushed pineapple. I added the whole thing, with juices, to the pancake batter and they turned out to be a delicious change of pace from banana. Tropical, moist, lightly sweet and fluffy, they didn't even need a lot of syrup.

Basic Pancake Recipe
1 C flour (I always split this 50-50 whole wheat and white)
1 C milk (this can be any kind of milk - I have tried soy, whole, 2%, and buttermilk)
1 egg
1 Tbl sugar
1 Tbl oil
1 Tbl baking powder
1 serving fruit - I suggest crushed pineapple, banana, grated apple, or berries depending on what you have on-hand
Makes 8-10 pancakes

Pancakes can be a great vehicle for extra nutrition for kids (or adults). For underweight children like M, they can be liberally buttered, or you can sneak in a little protein powder, increase the proportion of whole wheat for kids who need more fiber, etc. Having the ability to adjust the ingredients to your family's needs is one of the best things about making from scratch rather than a mix.
Posted by Amy at 7:58 AM 3 comments:

On my last birthday, we discovered that Moriah likes the slow roasted filet from Outback Steakhouse. Since it costs $16.95 per serving, I've been trying to find a way to duplicate it at home. A little research on the web netted this recipe I am home today, I happened to have a steak in the fridge and a big rosemary bush out front, so I decided to give it a try. 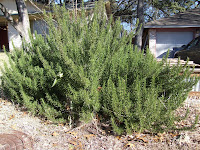 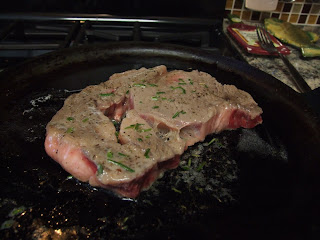 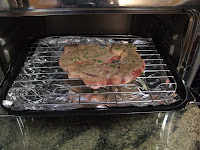 25 minutes later, the steak came out of the oven looking pretty good. I previewed a juicy, perfectly medium-rare red-meat morsel, to make sure it was good enough to feed Miss Picky. 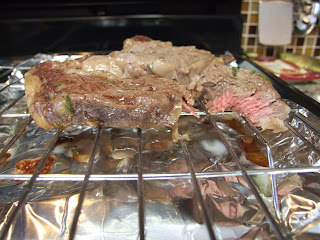 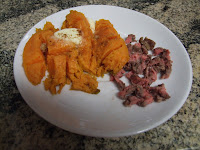 Prepared a roasted sweet potato with butter and a sprinkle of brown sugar and cinnamon to go with tender bite-sized pieces of the steak. It looked pretty good to me! 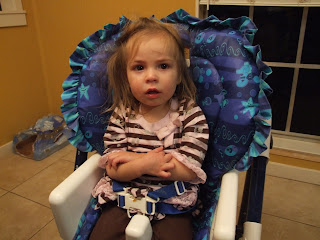 And this is the response from my Mighty M...can you see the tears?!

Next stop after she refused to eat anything but cheerios in her high chair was the computer desk for some youtube videos distraction. That got us 5 bites. Then she'd had enough and went to go play with the power cord to the fax machine. After repeated "no"s she got a 60 second time out on the living room rug. That was so upsetting that she ended up throwing up the 5 bites plus all of the afternoon snacks. Sigh...